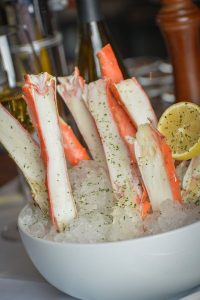 Steak 44 is located on 5101 N 44th Street. Michael and Jeffrey Mastro opened the restaurant in 2014 with their father Scott and Dennis Troilo. Their goal was to have a steakhouse that had an inviting and upscale environment.

Steak 44 has a three thousand bottle wine vault that is in the entry for anybody who walks in can see them. Their restaurant is diverse in that you can pick the type of dining wanted. If you want intimate and romantic setting they can accommodate you as well if you are looking for a larger group setting.

Their menu features USDA Prime steaks with a variety to choose from. If you are not in the mood for beef, you can choose from other quality cuts of meat like chicken, pork, lamb or veal. If seafood is more to your tastes, they have amazing Hawaiian poke, Alaskan king crab, Maine Lobster or oysters from the West and East Coast.

What an amazing place to take your special someone. Share an appetizer and add one of their amazing sides to your meat selection. No wonder they have over nine hundred reviews online with a four-point-seven-star rating.

Durant’s at 2611 N. Central is a steakhouse rich in history. Opened by Jack Durant in July of 1950, it can still boast that it is a family owned and operated business. 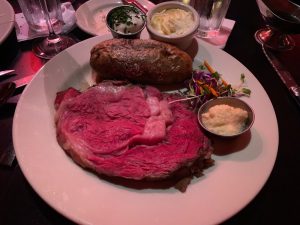 Jack Durant is somewhat of a historical character who was raised in Tennessee. In the 40’s he was a pit boss at the Flamingo Hotel which was owned by Bugsy Siegel. He was listed on the FBI records as one of the top ten most dangerous men in Arizona!

Known as a hot-spot for movers and shakers, Durant’s is iconic for power lunches and dinners in their famous red booths. Even though the wallpaper has been changed out, it is always the same red-flocked patter that Durant personally chose. Even the waiters wear the same design of red tuxedo vests.

With their long history in Phoenix, no wonder Durant’s is a local favorite. The regular customers always enter through the back door into the kitchen to catch a glimpse of the special of the day. I can see why they have over eight hundred and fifty raving reviews on the web. 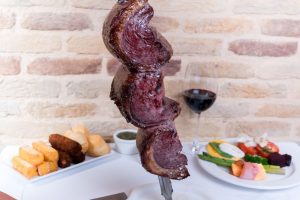 Galeto Brazilian Steakhouse was opened in 2014 in Oakland, California. Today they have three with the one I am writing about in Chandler, Arizona. Chandler is a sleepy town about twenty-three miles from Phoenix but is so popular they pop up when searching for steakhouses in Phoenix.

Churrasco is Brazils traditional way to cook meat. Created in the seventeenth century, the art of fire-roasting meat was a cooking technique used by Gauchos or Brazilian cowboys. Today it is much the same roasting meat from rib-eye to beef-ribs over hot stone coals seasoned with rock salt.

When eating at Galeto Brazilian Steakhouse be sure to bring your appetite! You will see up to fourteen different cuts of meat to choose from like pork, beef, chicken or lamb that is cooked on a skewer and sliced at your table.

While there are not a lot of reviews on the web, they do get over a four-star rating by those who have posted one.