With that said, I was curious to see how many burger places are in the area. There are well over three hundred places in the city that sell hamburgers. Of course, there are your regular chain restaurants but then there are those entrepreneurs who take the leap and open their own restaurant. You will not the “dollar” deals like the fast food restaurants but I assure you you will get a much better burger at the specialty places. 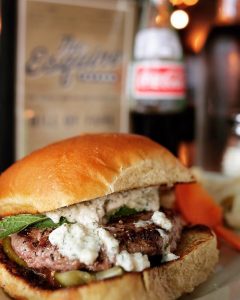 Esquire Tavern is located on the River Walk in downtown San Antonio. The Esquire opened in 1933 as a result of the end of Prohibition. A little history is in order here about Prohibition and how the citizens of the United States survived.

The United States government voted to outlaw alcohol on January 16, 1920. It wasn’t illegal to drink alcohol, it was just illegal to make it. Clever entrepreneurs found they could open a “blind pig” joint where the entry fee included seeing a live animal and a complimentary drink.

During that time, Al Capon was sent to prison on June 5, 1931. It is said his bootlegging business was hauling in about sixty million per year. Well, he did not pay taxes and that is what got his butt in prison.

Prohibition ended on December 5, 1933 and that was the day the Esquire Tavern opened. The Esquire closed in 2006 but was revived when Chris Hill purchased it in 2008 and opened it in 2011.

The Happy Hour runs Monday through Friday (or join them for their late-night specials every Thursday through Saturday from 11pm to1am) from three to seven. They offer three dollars off cocktails and wine and one dollar off Texas draft beers. Their snacks include Deviled Eggs, Shrimp Toast, Pulled Pork Sandwiches with Waffle Potato Chips and Green Eggs and Ham Nachos!

They have over one thousand six hundred reviews on the web with a four-point four rating. That makes it one great place to put on your “to go” next time you are in San Antonio.

Originally a 1920’s gas station, Tycoon Flats transformed it into a restaurant thirty-five years ago. Owned by two brothers, Malcolm and Richard Hartman, they call this place a “Dive” but it is much more. 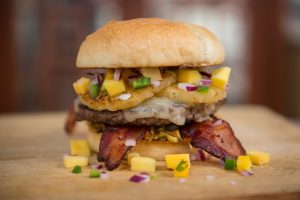 Located in N. St. Mary’s Strip, Tycoon Flats boasts the largest burger selection in town. They have thirty-six different types of burgers, but it doesn’t stop there. Their handmade hot sandwiches will satisfy even the pickiest of eaters and be sure to try their fish tacos which are award winning. Add a craft salad or their house marinated fried pickles and you have meal you will never forget!

You can dine on their patio/beer garden where there is a fifty-foot bar serving twenty draft beers. Of course, they serve wine and craft cocktails, but you should try their award winning Bloody Mary’s.

You will have to go there for their Christmas burger which has homemade cranberry sauce, spinach, feta cheese, bacon covered in brown sugar served with a half-pound beef patty on a freshly baked bun. You can see them make one of these on their website when they were featured on The Texas Bucket List.

There are over one thousand two hundred rave reviews online. I can see why they were featured on The Texas Bucket List twice! 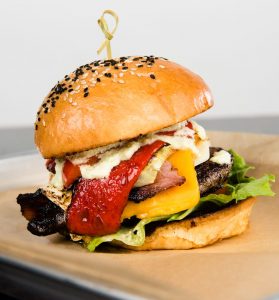 Hawx Burger Bar & Electro Lounge is located in the Dellview area of San Antonio. It was the dream of Christian Hawx to open his own burger place. With the help of his brother, Omar, and his mother, Thelma, they have successfully branded themselves as “gourmet” burger joint.

Using double grinded Angus Chuck beef, Hawx Burger Bar and Electro Lounge, believes in using only the freshest ingredients around. From freshly baked buns to slicking cheese off the block, they don’t cut corners when making their hand-cut fries or slicing ham right off the bone. Their house-made sauces and aioli’s are the perfect complement to their burgers. Add some Fried Pickles, Onion Rings or Jalapeno Poppers or their amazing French Fries that are sautéed with white truffle oil, parsley and topped off with grated asiago cheese.

Enjoy live music in their Electro Lounge while you rant about them on the internet.